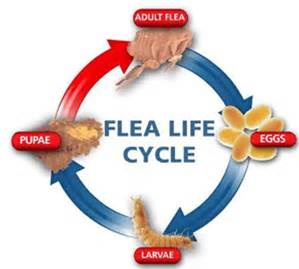 Flea larvae are approximately 3 to 5.2 mm long and are semitransparent white in color. The larval stage lasts from four to 18 days, after which larvae spin silken cocoons and enter the pupal stage. The pupal stage may be complete within three days, or it can last as long as one year. It’s essential to get pest control help from your Spring Valley exterminator to eliminate the larvae as well as the eggs.

Flea larvae hatch from eggs that were laid by a female flea and have fallen off the animal host. Once away from the host, the larvae seek out shaded locations such as cracks in the floor, in carpets, in pet bedding or protected locations under and in furniture. They are almost impossible to find. Flea larval survival depends on relative humidity and temperatures. Since dehydration is fatal to flea larvae, they will not survive relative humidity less than 45-50 percent or soil temperatures greater than 95 degrees Fahrenheit. However, if outdoors, larvae will survive in cool, shaded areas and do very well in crawl spaces. In environments of suitable humidity and temperatures, fleas will develop all year round.

Flea larvae complete three larval instars (stages) and, depending on their environment, will range in length from about 3-5 mm long. Flea larvae have no eyes and no legs. Their body is maggot-like and whitish, but turns progressively darker as the larvae feeds on feces excreted by the adult fleas. Nice, hey? Other than feces, larvae will feed on various types of organic matter such as food particles, dead skin, dead insects and feathers. Flea larvae do not take a blood meal directly from a host, unlike adult fleas. The flea’s larval stage is completed within about 4-18 days. One of the last activities of flea larvae is to spin a silken cocoon and then enter the pupal stage.

Controlling flea larvae usually involves using vacuums to remove them, use of insect growth regulators and dust formulations that cause desiccation of the larvae. Your local pest control company in Spring Valley will have all the necessary equipment.

Adult fleas begin searching for food when they emerge from the pupal stage. While fleas are noted for their jumping abilities, they will remain stationery when a suitable host is located. Females begin laying eggs within 48 hours of the first feed, thus beginning the life cycle again, so it’s essential for your Spring Valley pest control expert to destroy all four stages.

Cold environments cause eggs to perish before hatching. Humidity below 45 percent will kill larvae. Fleas in the pupal stage will become adults more rapidly in the presence of warmth and high humidity.

The flea eggs, larvae and pupae are much more secretive and much less active than adult fleas. They are found in out-of-the-way places like behind, under or in the furniture, in the pet’s bedding, inside cracks and grooves in the floors and in the carpets. Flea eggs that were deposited by the female adult fall off your pets as they move, allowing them to be distributed throughout the environment where a pet spends time. Flea eggs represent about one-half of the entire flea population present in an average home. Larvae make up about 35 percent of the flea population.

If conditions are favorable, the larvae will spin cocoons in about 5-20 days after hatching from their eggs. The cocoons are the flea’s pupal stage and account for about 10 percent of the flea population. This cocoon stage is the last developmental stage before the adult flea emerges. Engage a Spring Valley pest controller to ensure that they never do! If environmental conditions are not right for emergence, the cocoon can protect the developing flea adult for months or even longer. The adult flea does not emerge until a potential host is detected by vibration, rising levels of carbon dioxide and body heat associated with the host. A pet walking by, or people moving in the house alert the flea to emerge from its cocoon to feed. Once a flea has emerged from the cocoon, it will begin taking a blood meal on a host within 24-48 hours. Shortly after the first meal, adult fleas will mate and the female fleas begin laying eggs on her host within a few days. Female fleas are not able to lay eggs until they obtain a blood meal.

Eggs are not attached to the host. Eggs will hatch on the ground, in rugs, carpet, bedding, upholstery or cracks in the floor. Most hatch within two days.

The flea larva is a small "grub" that lives in carpet, in cracks or joins of timber flooring and in soil areas. A readily accessible supply of organic matter, such as shed skin flakes from humans, is essential for its development. This is the critical point in the life cycle of the flea, so it’s vital for your Spring Valley pest control contractor to kill them all.

Fleas are of the order Siphonaptera.

The adults are small, wingless and about 2.5 mm long. Their bodies are shiny and reddish brown in color. They are covered with microscopic hair and are compressed to allow for easy movement through animal fur. 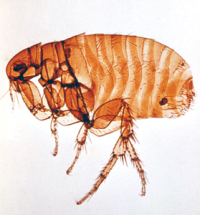 Adults are parasites that draw blood from a host. Larvae feed on organic debris, particularly the feces of adult fleas, which contain undigested blood. Fleas commonly prefer to feed on hairy animals such as dogs, cats, rabbits, squirrels, rats, mice and other domesticated or wild animals. Nonetheless, they are happy enough to transfer to humans, hairy or otherwise. Fleas do not have wings, although they are capable of jumping long distances.

With a heavy infestation of adult fleas, the affected rooms should be fumigated with a suitable insecticide dispensed through a fogging machine. This will provide immediate relief (like a flea "bomb") but will not kill the larva or egg sacs. The carpets and other areas should be treated with an IGR synthetic pyrethroid insecticide. Your Spring Valley pest controller will have the necessary equipment and chemicals.

Fleas depend on a blood meal from a host to survive, so most fleas are introduced into the home via pets or other mammal hosts. On some occasions, fleas may become an inside problem when the host they previously fed on is no longer around. Then fleas focus their feeding activity on other hosts that reside inside the home. An example of such a situation is when a mouse inside the home is trapped and removed, the fleas that previously fed on the mouse are then forced to feed on pets or people.

Since fleas are relatively easy to see in their adult stage, most of the attention is directed at adult fleas. Adult fleas are usually easy to locate, especially if the homeowner and their pets return to the house after a long vacation or other absence during which the resident flea adults were not able to take a blood meal. Upon returning, the homeowners are often greeted by fleas jumping around and trying to land on them and their pets.

Be wary of very cheap prices for flea control. Check which pesticides are to be used. Make sure that your pest control company isn’t proposing to use the far cheaper, less effective, solvent based pesticides which can be acutely harmful in premises where occupants may suffer from asthmatic or other bronchial ailments. A Spring Valley pest control company with a solid reputation is your best insurance.